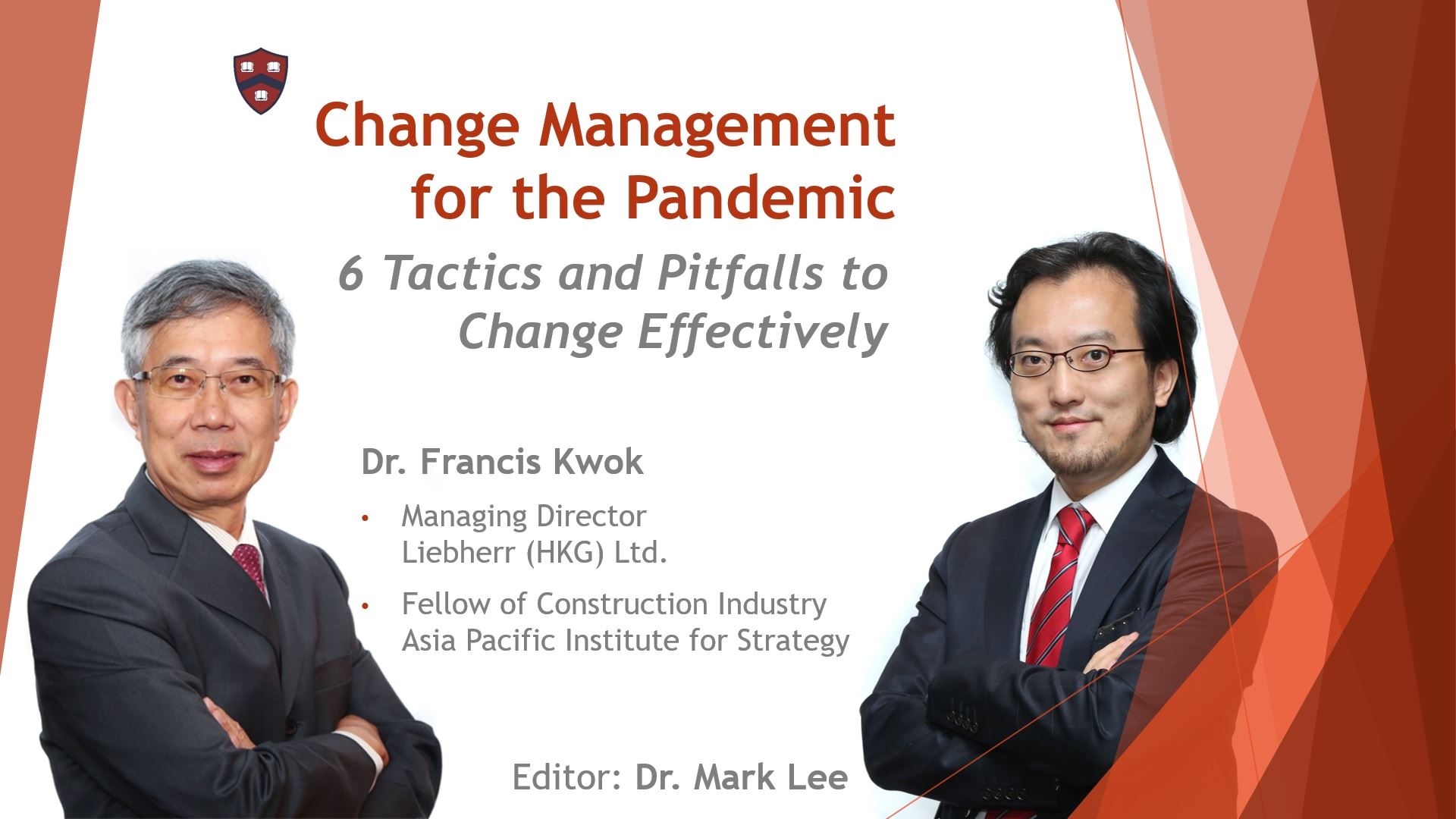 For years Hong Kong has always been a vibrant city attracting admiration from people all over the world. Yet its glitz and glamour has been gradually fading as Hong Kong is not keeping up with the pace of the rest of the world.

I don’t think our past success has made us blind or stagnant. Hong Kong people are still energetic, innovative and resilient as ever. But we have to learn from our mistakes in the past in order that we can improve for our future.

One constant yet critical mistake we have to confront is our failure in change management. We are falling behind not because we are standing still -- we are just not changing in an efficacious manner. Take an example, in the 2009-10 Policy Address our then Chief Executive Mr Donald Tsang painted a rosy picture for the future of the Six Industries (education services, medical services, testing and certification services, environmental industries, innovation and technology, and cultural and creative industries). The policy was something addressed for the need of Hong Kong and was foresighted. Regrettably, a few years later it was proven to be a mostly broken promise. The problem was that in 2005 our then Chef Executive Mr Tung Chee Hwa was strongly emphasizing four totally different Pillar Industries (financial services, trading and logistics, tourism, and producer and professional services). Among many other things, we failed because we neglected the change strategy. By now, 12 precious years have elapsed!

Throughout my career I have been dealing with various government agencies. Indeed the mindset of our government needs to be changed. Yet many of the officials I met were dedicated and conscientious. It would not be fair to claim that all government agencies are embracing the attitude of “do less, make fewer mistakes; do nothing, make no mistakes (少做少錯, 唔做唔錯) “. Nevertheless, for them to make changes, be they changes of legal framework, policies, or code of practice, the process is almost always painfully slow; and somehow they all have to break through self-imposed and/or outward-inflicted hindrance in order to succeed. Their frequent failure or delay in change implementation has contributed to Hong Kong industries’ difficulties in timely picking up new trends, likely making Hong Kong have to sooner or later swallow its bitter fruit.

Without naming any agencies or getting involved in any political issues, I would like to share some of the lessons I learned from the officials I met. For the government to make changes, dealing with various stakeholders is a very complex and timing consuming process. I would like to focus on some of the “stakeholder engagement” issues.

Government officials rightly need to be impartial and maintain an arms-length distance from various stakeholders. As far as all parties are aware of their position, informal communication is not bound by official rules and is effective to build up relationships and thus to gain high quality detailed personal feedback. Change leaders may find that many mid-level managers are eager to build up their network and to gain knowledge, and to clarify concerns they have for the changes.

A government official may unintentionally line up Stakeholder A and Stakeholder B. The two stakeholders may create some synergy in their businesses which are not related to the government at all.

When a government agency is visited by its oversea counterpart, the officer in charge may invite the visitors to visit the facilities of some dominant local players, making the dominant players feel well respected and honoured.

Some agencies maintain good collaboration with the local universities. They provide talks, field trips and so on to the students, and start shaping them with “correct” attitudes even before the students start their career.

After changes are implemented, successful change leaders would not forget to thank the stakeholders, even the ones of different opinions. They also maintain good relationship with the stakeholders, and, when timing is right, ask their opinions for some other issues, or even invite some of them to join certain advisory committees.

At times not all stakeholders can be easily identified, especially the ones who are not directly impacted by the proposed changes. NGOs, religious leaders or village chiefs of the neighbouring territory, etc may pop up all of a sudden for some genuine reasons and make an impact on the public engagement process which has already been taken place of a few years.

For government agencies, one easily overlooked category is other government departments. The traditional wisdom is that one should know one’s boundary and not step into others’ territories. In this intricate world, in reality it is difficult, if not impossible, to have a clear cut on one’s responsibilities.

Seth Godin says in his All Marketers Are Liars, “The biggest myth marketers believe: I have money, which means that I am in charge. I have control over the conversation, over the airwaves, over your attention and over retailers. You, the marketer, are not in charge... You’re not in charge (you can’t control the conversation). Most messages don’t come from marketers.” It is equally true (and wise) if we substitute the word “marketers” with “government agencies”.

It is difficult to get a second chance to make a first impression, and is therefore vital for a change leader to properly position oneself at the very beginning.

Unsuccessful change leaders may fail to let the favorite stakeholders know their ideas in advance so that the stakeholders may be convinced to back up their ideas later on. What can even be worse is that unsuccessful change leaders may wrongly rely on “fake friends”. It may cause substantial amount of embarrassment and damages if things turn unpleasant.

Above is some of my observations. Some of the more sensitive issues, such as public participation and mass media manipulation, are not discussed. I hope that the managerial implications are also applicable to our businesses as we are all living in a complex and rapidly changing world.